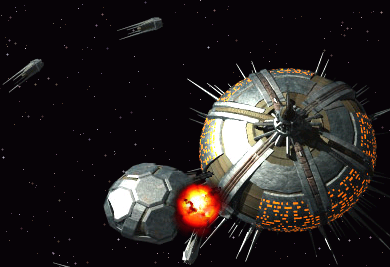 Zoanthropes are humans or human descendent groups which are defined by their social structure, either voluntarily doing away with the vastly more complex society of most contemporary humans, or simply lacking the social faculties enabling a more complex society. These social structures are often characterized by a lack or low level of centralization, little to no specialization, and a primitive concept of property, if one even is present. Note that this does not preclude Zoanthropes from possessing the knowledge required to fabricate advanced ships and weapons, though they almost universally lack the ability to design such devices for themselves, and often receive the designs from external sources, such as the Ferian ships and weapons, which were designed by the Ringers. Factions that are zoanthropes due to an inability to form a more advanced society (often stemming from genetics, either natural or artificially induced), tend to be exploited, such as the Ringers using the Ferians to mine ore in a relationship that primarily benefits the former, or in the example of the Dwarg using the Zoanthrope Raiders as cannon-fodder.

Some factions, such as the Ranx Empire actively condemn this as a form of slave labor (and a pretext for war). The Commonwealth is known to be opposed to the Dwarg exploitation of the Zoanthrope raiders.