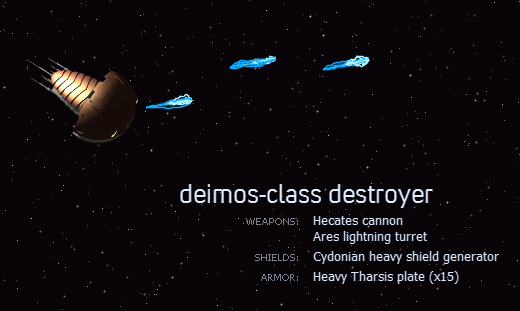 Description: A huge, imposing ship, it is probably the first Ares capital ship the player will meet, with the Phobos being second. It isn't as hard to kill as the Phobos because if any hull segment hits 0, it will die, whereas the Phobos has nonCritical armor segments, meaning that even if a nonCritical segment hits 0, it won't die. Some Deimoses (?) may be encountered as they are wandering around the system, patrolling for enemies of the Ares Sect. It is advised to not attack the ship unless you can destroy it from afar.

One of the only ships to have an odd number of hull plating, the Deimos isn't really hard to take down compared to its more massive and deadlier cousin, the Phobos, because of the lack of nonCritical armor segments. It is advised to use a long range weapon such as the katana star cannon so that you may pound it from afar, and further from the range its lightning turrets and hecates cannon can reach.

NOTE:
The Hecates cannon mounted on this ship also has a small swivel, so it is much more adept at hitting you compared to you hitting it (unless you have an omnidirectional weapon).