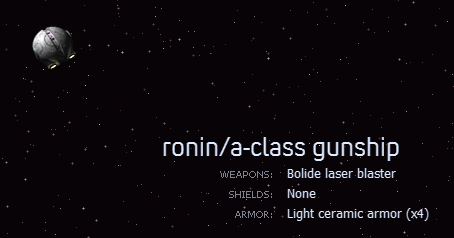 A relic from a bygone era, this old military ship is now used for civilian purposes, having already outlived its usefulness as a military craft.

This is the first of the Ronin series, with less armor and weapons than the Ronin/B and /C, and no shields.

It's not really an enemy craft, so not many players have fought this ship too often. It's greatest weakness, aside from using a Bolide, is that it has no shields. Just keep pounding down on it and it should die eventually.