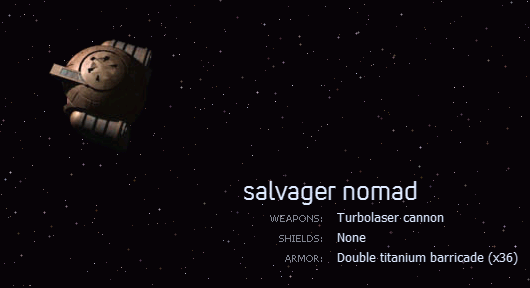 These ships wander around within a system and loot wrecks, creating competition for coreward bound pilgrims. There seems to be much animosity between the two factions, but this ship will not fire unless fired upon despite the tension.

This ship is hated by some players as it steals precious loot. Some players let this ship gather all the loot and kill it after it is done with a system. Some mods let this ship get stronger or appear as a floating store. As for weaknesses, this ship is very hard to kill with its many NonCritical armor segments, but is manageable if either the player's armor or shields can take the pounding this ship can give.

An easier way to kill one of these is to use an XM300 Reaper missile on it, then run (though target it first so you can see where it is). This will irradiate it, and given enough time, it will die, just like players will if the player-ship is irradiated. Reapers can be found in Sapiens Compounds.

Notable mods for this ship can be found on Xelerus.