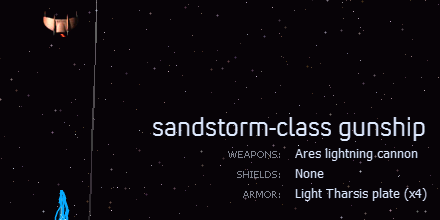 The first Ares ship players will encounter, this all-purpose gunship is the only ship seen guarding Ares Outposts, and it also escorts Polar-class freighters and shows up nearly everywhere else the Ares are. Like the Corsair of the New Beyond and the Wind slaver of the Ungoverned Territories, this is a ship that (when it first shows up) has a decent weapon that can be dangerous in swarms, but has very weak armor.

When you first meet this ship, probably at an Ares Outpost early in the Outer Realm, its weapon may be dangerous, but unless you only have a laser or kinetic weapon (or weak particle weapon) it should be very easy to destroy. The armor has a fair amount of particle resistance, but it's light enough that it should still be pretty easy to destroy it with a particle weapon such as a Tev 9 blaster or variant on it.