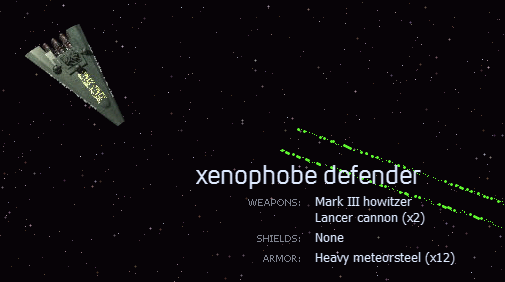 Description: Found in the Outer Realm with Xenophobe fighters, these ships aren't usually a threat to the prepared player, and definitely not on the scale as the Xenophobe worldship.

By the time a player meets them, which is usually after the Sung, players either have particle-resistant shields or armor as well as an ion or thermo weapon, making these ships easy to take down since heavy meteorsteel is only effective before Sung space. Your best bet is to kill it before it can do too much damage, then take on the escorting fighters (which are much softer targets, but harder to hit). You'll often see wrecked Defenders around systems where station guards have killed them. If the station is alive, then it was just a defender encounter. If the station is dead, or if a lot of stations are dead, there may well have been a Xenophobe worldship as well, and you should be wary of encountering it.