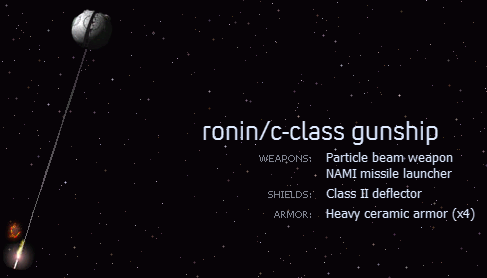 This is the best armed and armored of the Ronin series. The other ships are the Ronin/A and /B.

As with the whole Ronin series, is not really a ship that is encountered often as an enemy. However, if faced in combat with this version, the player must be aware of whether their ship is ready to face a deadly combination of particle damage and a barrage of starburst missiles. If not, break off contact and resume battle at a later time when proper preparation is taken care of. Out ranging this ship is really out of the question as the particle beam weapon has a long range, much longer than the more common kinetic and laser weapons that appear early in game.