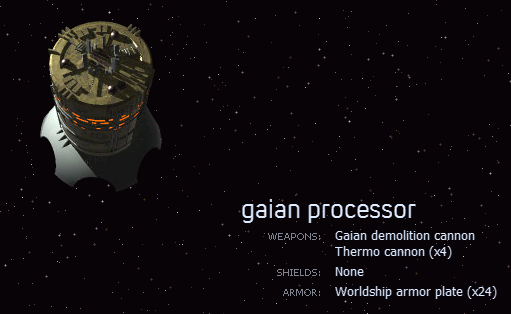 Description: The Gaian processor can be seen wandering around in the Outer Realm, cleaning up the numerous wrecks left behind by the player and the war between the Ares Sect and Commonwealth Fleet.

With worldship armor, this ship is completely immune to particle and blast damage (not to mention laser and kinetic). You'll need at least an ion/thermo weapon to do any damage, and even that has a high resistance. On top of that, this ship has 18 non-critical armor segments, and only 6 critical ones, so it will be one of those that you'll need to hit. It also will be firing thermo cannons and a powerful Gaian demolition cannon.

This ship is a huge pinata, but isn't as delectable as the Salvager Nomad is. Since the Gaian destroys the target wreck and not loot it, there isn't much goodies on the inside. It is also a weird fact as to how this ship has worldship armor plate when it isn't a ship of the Xenophobes. Is there a link between the Gaians and the Xenophobes? Only time, and George, can tell.