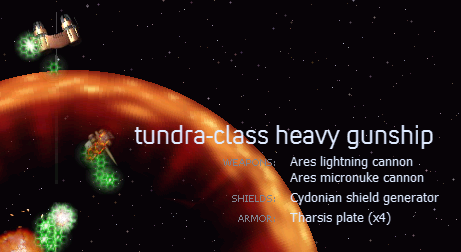 The tundra is a great ship for taking on capital ships and even stations due to its unique weapon, the Ares micronuke. This formidable weapon creates a shockwave that can hit a single object multiple times, yet only has to be fired once (see below for shockwave image). Although the mechanics for shockwaves have changed in 1.06 beta, #473 Shockwaves only 'hit' a single object a maximum number of times the micronuke cannon is still a weapon to be feared by ships and stations alike.

The ship is equipped to fight a large scale battle, with its micronuke being able to heavily damage capital ships and stations as well as destroy a fleet of gunships. However, since the player can't use capital ships just yet, the micronuke does negligible damage as most playerships are small. Remember to use some ion resistant armor or shields against the lightning cannon and there may not be a single scratch on your ship :D

Note: The micronukes can do more damage to the EI500 because of its larger size.