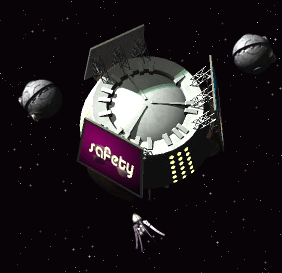 These semi rare stations are eagerly sought by players. They are found in systems shortly after St. Katharines. They are very useful since they allow players to order non military items and, in 1.01, could order the hyperion reactor.
It is a great idea to order targeting roms if you're lacking some mid-game, or need extras if you're playing with Playership Drones. Also it would be a great idea to order crystals or weapon enhancers for late game, and since they come in packs of three, (only in newer versions, the changelog does not say exactly which version implemented it) it would be great to get enhancers for that +150% weapon.

Sometimes, the freighter gets attacked and does not make it to the trade post. What you have to do is to find the two stargates and trace a likely path that the freighter would have taken and look for its wreck. Loot it and the ordered item should be in the cargo hold.