The Domina powers available to you through the 'i'nvoke menu, are dependent on your Domina level, and any active cooldown timers. You start as a Novice, and can gain more Domina Levels through increasing your Domina relationship by donating certain items at a Sisters of Domina station.

Once you've invoked a power, that power and all other powers of that level vanish until the timer ends. Each level has it's own separate timer, and the length of each timer varies by level; you have to wait longer for your level four powers than you will for your level two powers.

Surrounds your ship in an impenetrable shield of force that blocks all attacks, unfortunately, it blocks all of your weapons, as well. Lasts 16 seconds. Unlike the other powers, you can always invoke sustain, even when the cooldown timer is going. It just won't always work. 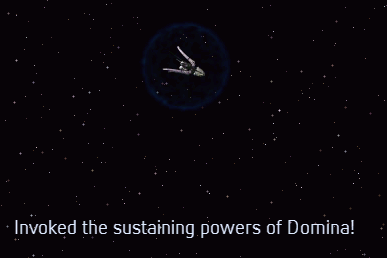 Restores your shields to full health. If you don't have any shields installed, it will repair your armor instead.

Doubles all weapon damage for 20 seconds. 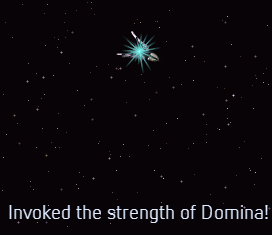 Like Sustain, it protects your ship from all damage, but unlike sustain, your own weapons will penetrate the shield. Lasts 5 seconds at Domina level 3, and 8, 11, and 15 seconds, at level 4, 5, and 6, respectively. 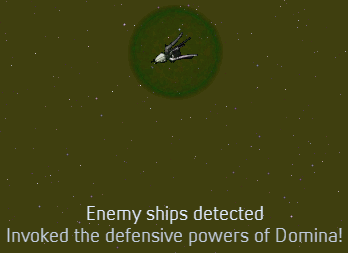 Reveals all stations in the nebulae within a star system.

Fires an expanding wave weapon, that does 6d6 (6-36) dark fire damage to everything it hits. Since it is an 'area' type attack, it will do damage multiple times, depending on the size of the ships it hits. 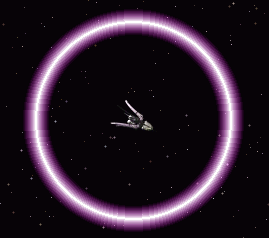 If you are about to be destroyed, this power will instead sustain you for 6 seconds. 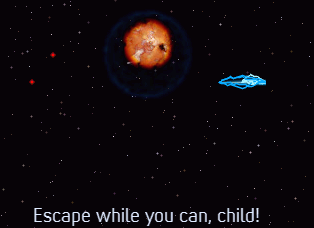 Fires an extremely fast expanding wave weapon that does 8d12 (8-96) dark steel damage to everything it hits. Like Circle of Wrath and the Ares nukes, it will do damage multiple times depending on the size of the ships it hits. It also has the 'shatter' attribute which means that, unless they are specifically programed to, enemies destroyed with Shatter will not leave wrecks. 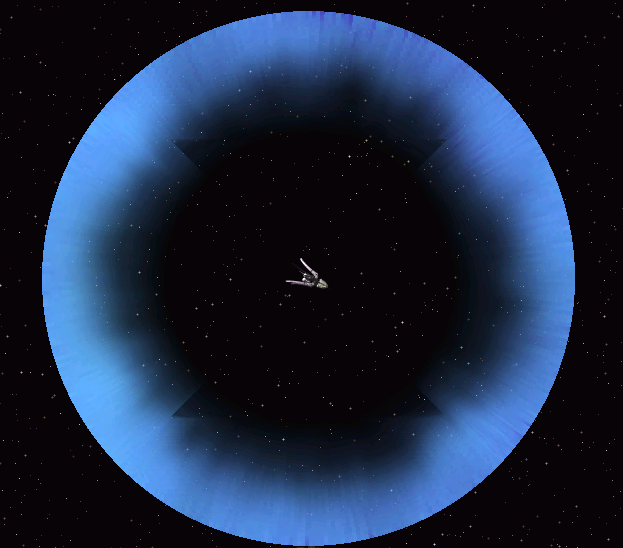 The 'onshow' block for this power is commented out, and it has no invoke code. It can be presumed that it is only a placeholder. What will this power do? Only George can say.

The initial powers screen shows only Sustain:
(Note: 1.1 has the alphabetical keys replaced with numbers) 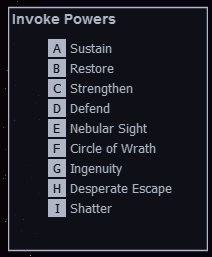 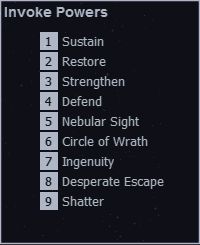