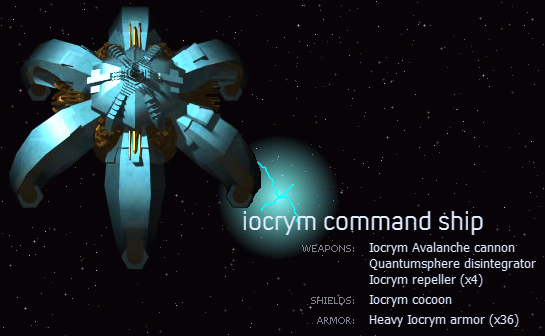 The boss ship. The ship at the end of Part I, defending the last gate in Human Space before the Core.

There isn't much special about the Iocrym cocoon, but it's still the strongest shield in the game. Lots of HP (though less than the Mammoth 100), lots of regeneration (though less than the Lazarus), together they make it the strongest since the Mammoth has much lower regen and the Lazarus has much lower HP. However, the shield also has a very long down-time, so once it's down it will stay that way for long enough to do a good amount of armor damage. If you have a weapon good enough to get through it in the first place, you won't have any trouble when the down-time is over and it starts recharging, either.

When the shields go down for the first time, Iocrym sentinels spawn, see Other.

The heavy Iocrym armor the Iocrym Command Ship (ICS) uses is immune to laser and kinetic, and very resistant to particle and blast. None of these four can be used effectively against it at all, though players really shouldn't have those types of weapons by the end of the game. Ion and thermo can be used to kill it, though positron and plasma will work much faster and antimatter faster still.

There are only four critical armor segments on this ship out of thirty-six. Shoot directly at the front.

The ICS only has one long-range weapon, an omnidirectionally mounted quantumsphere disintegrator. This fires large, tracking quantumspheres. If they hit a ship with shields down/no shields and without disintegrate-immune armor, they will instantly destroy it with no wreck no matter how much armor strength is left. However, the spheres themselves are quite weak, despite their size, and can easily be stopped with the high-level weapons that are needed to defeat the ICS.

The Iocrym repeller is a very short range weapon. It's not omnidirectional, but the four on the ICS are mounted omnidirectionally. It doesn't do a huge amount of damage, but it will push ships away from the ICS that get too close. It really isn't necessary to ever see this work; it's a bad idea to get this close to the ICS, because of the Avalanche cannon.

The Iocrym healer repairs armor, the same way a patcher arm or patch spider does, but much faster.

When the shields are down, it will spawn several Iocrym sentinels. If you kill these, it will spawn more. You may already have a way to disable sentinels, if so, use it, it will effectively EMP them for long enough to kill the ICS. If not, another possible tactic is to lead the sentinels at least 500 light-seconds away, then use a transpace jumpdrive to get back to the ICS.