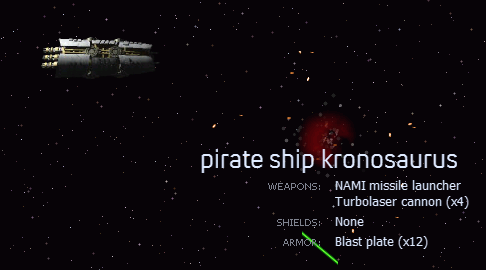 The Kronosaurus is a special ship that appears when the player has killed 4 frigates. Taking down the Kronosaurus also leads to a quick jump in Korolov rank for some reason, and prevents the player from taking any more missions. Also, it is the only frigate that has no gunships escorting it.

As with everything in Transcendence, shoot at it from far away and out of range. It that isn't feasible, then another (albeit more fun and dangerous) approach is to close in to the ship and blast it with everything - a PK25 Morning star cannon +fast may do the trick as its wide spread means it can also hit the stilettos coming towards the playership. Make sure to dodge the turbolaser shots while closing in though, they do pack a punch in early game.