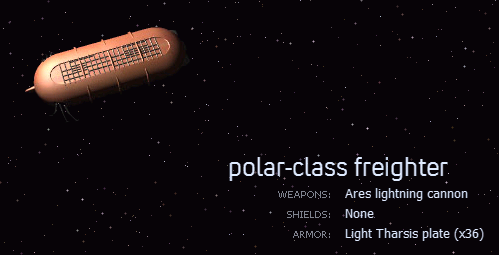 Description: The Polar is usually found in the Outer Realm, shifting ores and other war material to Ares stations. It isn't really a decent fighter, but it usually does come with sandstorm escorts. Usually, there are goodies inside such as ores you can sell to the Ringers.

Weak armor, no shields, weak weapon. Attack the critical segments at the front or back, or go through the side non-critical armor then hit it with a few missiles. Free ore!

These are usually escorted by Sandstorms, though, you'll need to either kill them first, or kill the Polar fast enough that they don't damage you much, then kill them.