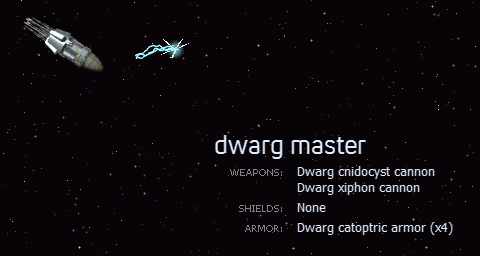 Description: The Dwarg master is an irritating ship to fight, possessing an EMP weapon that will paralyze the target ship to be cripped by a swarm of zoanthrope raiders.

It's best to have emp-immune armor when fighting this ship, or an ICX missile defense turret, since it's very hard to shoot down the projectiles of the cnidocyst cannon. Be aware that the defense turret is not guaranteed to block 100% of the shots, and if one hits you, use Sustain (I→A) immediately since EMP stacks. Also, if there is a sufficiently high enough armor on the ship, there will be no emp disabling even if the armor doesn't say so. That is because of inherent armor resistivity.

The master also has a particle reflecting armor, so players usually bring a blast or thermo weapon as a secondary weapon to deal with ships like these.