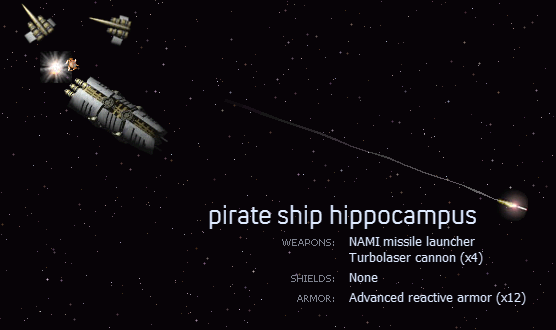 Description: Feared greatly in the early game as a big, nasty ship, it can do wonders on anything that has low-level shields and armor. These ships are great for tearing early playerships and freighters apart easily, as well as call for more gunship support when their flimsy Corsairs are down.

The player should NOT engage this ship unless he/she knows what to do and how to take this ship down. One way is to attack the rear of the ship, where the engines are, and use the fact that the turbolasers can't shoot directly behind. Not only are the turbolasers neutralized, weapons fire coming from the playership can also down any missiles coming its way.

After you've killed several pirate frigates, the stronger Kronosaurus frigate will try to kill you.