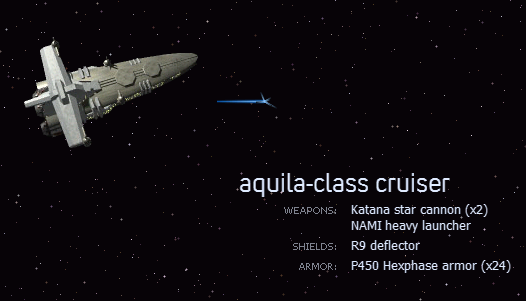 Description: The Aquila Cruiser is an interesting ship. Not only is it very rare to encounter one, but it seems like the ship that could finally win the war against the Ares. Although it isn't able to take too much damage, it's shown itself more that capable of destroying stations with ease. With a fast top speed - being able to match a Phobos - and a hard hitter, it is capable of making hit and run attacks that could cripple an opposing fleet. Equipped with the latest technology, it shines in stark contrast with the aging CSC's TeV 9s, making the Aquila seem more adept at combat over several star systems, exactly what the Commonwealth needs to win the war.

It's not as strong as the Commonwealth Star Carrier, but hits much, much harder. Equipped with the latest technology, these cruisers sport two Katana star cannons and a NAMI heavy launcher to boot. It also has a nice shield, the R9 deflector, that can withstand lots of damage before falling.


Aquilas are currently found in one location in Vanilla. It is Dantalion, where you get a mission from CSC Antarctica.